We are not makers of history. We are made by history-Martin Luther King Jr.

It has been a very busy February in the Social Science Department with the start up of the new semester.

Ms. Hallarn, who after reading the OECTA September 2015 article by Peter Cameron, a teacher at St. Elizabeth School in Thunder Bay and a Professionally Speaking magazine article from December 2015 (Nino Ricci an acclaimed Canadian writer) was fired up to integrate these ideas into her two Gr. 9 Academic Geography classes. Her classes were assigned two students and a person of their choice to send an inspirational message or personal compliment to. The caring messages were anonymous to demonstrate the fact that you never know whose lives you may have touched. Excellent work building community and celebrating Catholicity! 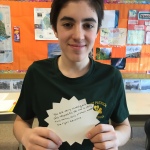 Mrs. Caza’s Civics class has also had an exciting February. Students were learning about the different systems of government and their benefits and drawbacks. Each student was assigned to a group that was either a democracy or an authoritarian system and they were given toothpicks and marshmallows and the task of seeing who could build the tallest tower. Democracy prevailed with the tallest tower! Mrs. Caza’s class also had a visit from our local M.P.P., Bill Mauro, who talked to the students about his role as an M.P.P., and the importance of civic engagement of our youth. Students asked questions about the issues that Thunder Bay and the province were facing today.

Be sure to check back regularly for the latest news and information.